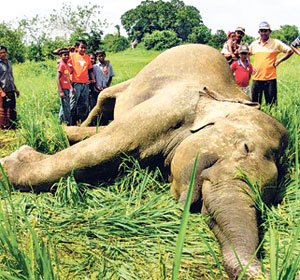 The Asian elephant has many threats facing it. But the biggest threat is us!

Elephants require huge amounts of land for their home range and quite simply, once the forest is gone so is the elephant. The increasing human encroachment into the rainforest also means that the wild elephants are more frequently in contact with human populations where they are not welcome, and are often shot for raiding crops.

This human elephant conflict (HEC) accounted for the deaths of 250 elephants and 160 humans in Sri Lanka alone over the past 12 months.

Hunting and poaching of Asian elephants for ivory and meat is also a major problem in SE Asia. Hunting pressure has already driven an evolutionary change which means that all females and now many males are born without tusks.

We are responsible redressing these issues that now threaten the very existence of this magnificent creature beyond this century.

It is important to note also that the threat is simply not one to the elephant alone. Within South East Asia the elephant is also an important umbrella species, which means that if it becomes extinct a great many other species will disappear along with it.

The threats we are needing to address are not solely threats to the Asian Elephant but threats to many associated species and those humans that are ultimately dependent upon them.